recently I've started to get the above error when dragging PowerPoint files into PDF-XChange Editor, in order to convert them to / open them as PDF files: 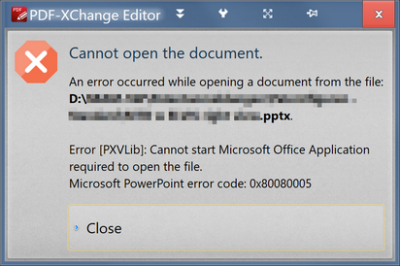 This happens only on one PC while on another PC, the PPT/PPTX files are converted to PDF instantly this way.

I'm only wondering now if that rather is an error on the side of PDF-XChange Editor or on the side of Microsoft PowerPoint, i.e. which of the two programs I'd rather should attempt to repair/reinstall?

You should start with trying a repair/reinstall of MS Office (or PowerPoint only) at first.

I thought so, however was somewhat reluctant because MS Office is so deeply interwoven with the OS that I always rather don't touch it in order not to break anything.

So I suppose the present case is not just a matter of telling PDF-XChange Editor about some DLL file or something like this?
--
Edit: I did a Quick Repair (of Office 2019, that is), and it sure enough fixed the issue in like two minutes -- seemingly without breaking anything, particularly not older versions of Office which I also have installed (as my true work horses). 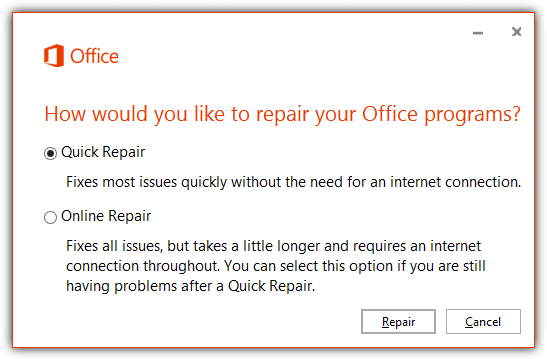 Unfortunately, the PXVLib-conversion from PPT to PDF broke down another time just now.

This happened after starting Visio 2003, which triggered an automatic repair of Office 2003, which in turn probably broke the PXVLib functionality.

It would be great to know more about how the PXVLib functionality in PDF-XChange Editor works (i.e. on what files and registry entries it relies, for example) in order to maybe fix it manually.

JFTR, I believe that the problem is related to the well known "NoReReg" workaround that includes doing something like this:

[make sure to google this before trying it]

...which however does not seem to work with Visio 2003

This would seem like an issue with the various versions of office you have.
When you launch that older Visio - it most likely reregisters some DLLs that are needed for our own conversion. As this happens between versions of office - and in a place that I've not had to deal with - I am afraid that I won't be able to be of much help here, other than recommending using a newer version of Visio if available?

you are right, this is clearly a problem of compatibility of several Office versions installed side by side.

Maybe in the future, someone finds the thread via Google search and has a suggestion.

If I should find a solution, I'll let the forum know here.

I hope you do find a solution and we will most certainly be happy for you to post it here!