Button to restore visibility of toolbars

Button to restore visibility of toolbars

in order to use as much of the screen as possible for displaying pdf files, I've added the button "Toggle All Command Panes" to my window title bar and use it to hide the menus, which I barely need since I have the most important buttons in the window title bar and can access all other features through the Quick Launch field or keyboard shortcuts. In the rare case where I need to use a menu, I can simply click on "Toogle All Command Panes".

Version 8.0.335.0 introduced a "new notification for users who have hidden all toolbars (often accidentally): it now shows an additional button to restore the visibility of all toolbars. This notification is located on the application's caption, on the right." Compared to the "Toogle All Command Panes" button which I use, the new button has the advantage of having a nice icon and being much smaller. However, the new button is not permanent, but disappears as soon as it is clicked to show all toolbars. Therefore, I cannot simply replace the "Toogle All Command Panes" button by the new button, because I want a button also to rehide the command panes/toolbars (I know that I can use Quick Launch or ctrl-F8 for this, but I would prefer a button which is quicker than Quick Launch and does not require me to remember a shortcut). However, having both buttons seems to be a bit redundant.

This could be avoided by automatically showing the new button only if the "Toogle All Command Panes" button is not already present.

In my view, an even better solution would be to merge both buttons into one button that combines the advantages of both. I suggest a single button which has the icon of the new button, but serves not only to show the command panes/toolbars, but also to hide them (i.e. to toggle them just like the old button does), and which not only appears automatically when all command panes/toolbars are hidden, but can also be manually placed in the window title bar and then stays there permanently so that toggling is always accessible.

What do you think?

Thank you for the excellent suggestion, I have forwarded this request to the Dev team for consideration and will let you know what they say.

did you get a reply from Dev team? 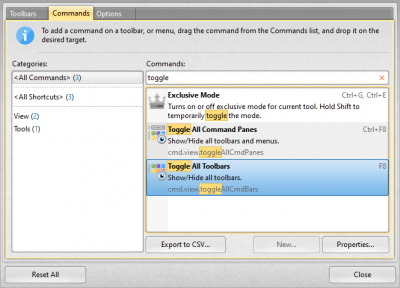